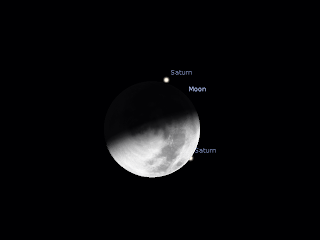 The Moon as seen from Darwin at Saturn ingress (20:05 ACST) and exit (21:19 ACST). Similar views will be seen at similar latitudes (Broome Weipa, Townsville, Cairns). Click to embiggen. 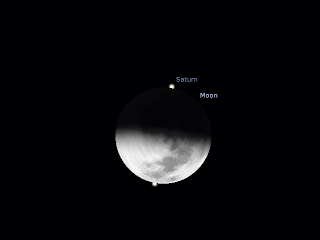 The Moon as seen from Alice Springs at Saturn ingress (20:10 ACST) and exit (21:40 ACST). Similar views will be seen at similar latitudes (eg. Carnarvon, Longreach, Rockhampton). Click to embiggen. 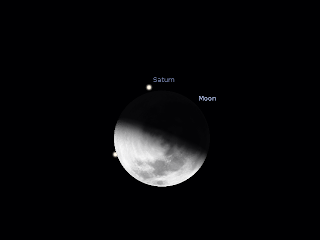 The Moon as seen from Adelaide at Saturn ingress (20:30 ACST) and exit (21:28 ACST). Similar views will be seen at similar latitudes (eg. Perth, Canberra, Sydney). Click to embiggen. 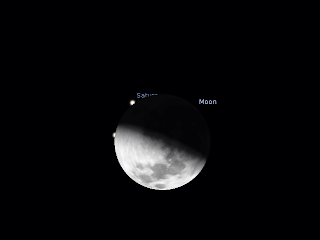 The Moon as seen from Melbourne at Saturn ingress (21:24 AEST) and exit (21:52 AEST). Similar views will be seen at similar latitudes (eg. Albany, Warrnambool, Orbost). Click to embiggen.
On the evening of Monday 4 August Saturn is occulted by the Moon as seen from the most of Australia. This is the third and best of these rare occultations, it is under reasonable dark skies, with Saturn slipping behind the dark limb of the Last Quarter Moon. Saturn reappears while the Moon is still reasonably high. See here  and here for images of the May 14 occulation.

The occultation occurs in the early evening with the Moon will be reasonably high above the north west horizon, a good time to show the kids this event (see below for a table of times). The Moon is easily visible and a ready signpost to Saturn.

The images above show the location of Saturn as it goes behind, then exits the Moon at some representative sites. Basically, the further North you are, the further towards the Moons north pole Saturn enters and exits.

Of course, if you don’t readly know where the north pole is, this is confusing. Basically the north pole of the Moon is where all the dark “seas” are that make the face of “the Man in the Moon”, the south pole is the bright end. 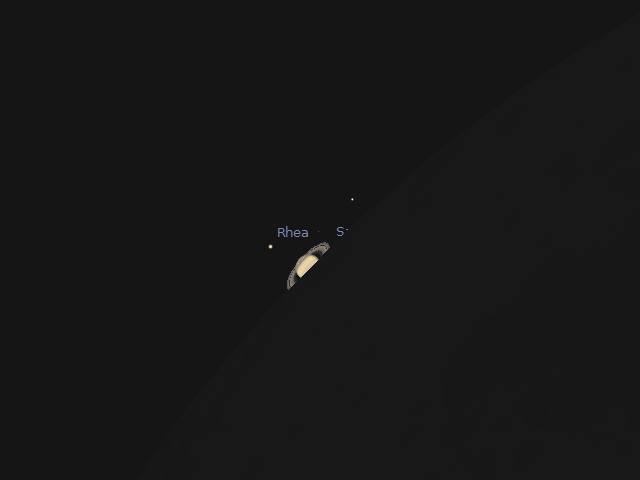 Saturn slowly slides behind the Moon as seen from Warrnambool at 20:56 AEST.

Although this event is easily seen with the unaided eye, it is best seen in a small telescope so you can see the ringed world in detail as it vanishes behind the Moon. Saturn’s moon Titan will be occulted before Saturn, so you can see the Moon occult a moon. 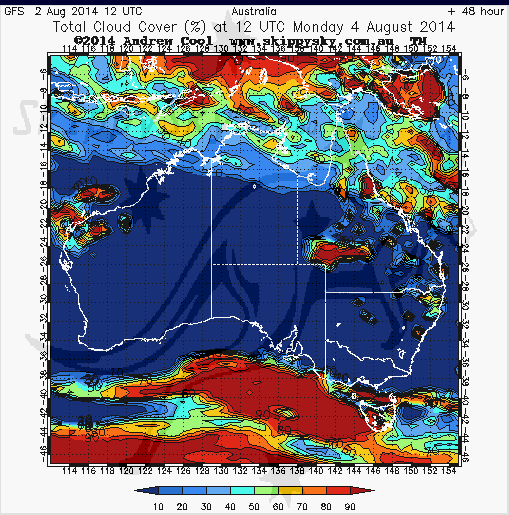 SkippySky predictions for cloud tomorrow around occulattion time, it is best to check closer to the event if you are intending to travel.

Weather is looking good for most of Australia, except Tasmania and perhaps Darwin.

If you are just watching with the unaided eye, Keep a close watch on the bright point that is Saturn above the Moon, you will see it suddenly “wink out” as it goes behind the dark edge of the Moon. It will be harder to see Saturn reappear from the bright side, but if you watch carefully you can see it slowly reappear.

In binoculars Saturn is a featureless oval, but it is big enough that you can see it slide behind the Moon rather than abruptly disappear.  If you have a way to attach your binoculars to a tripod, this will make observing very easy. If not, use the back of a chair or some similar object to stabilise the binoculars, so that the image is not continuously swinging around.

Start watching about half an hour before hand to get set up and familiar with the sky, earlier if you need to set up at telescope and get it aligned properly. This way you can watch the entire event comfortably (trying to focus your telescope on Saturn moments before the occultation will cause a lot of unnecessary stress).  It is advisable to set up and practise on the Moon a day or so before the event, so you are familiar with your telescope set-up. Tonight is a good time to practise with Mars close to the Moon.

The Moon is in its First Quarter phase, and it will be easier to see Saturn as the glare of the Moon will not be so intense. On the other hand picking up precisely when Saturn is about to reach the dark edge of the Moon will be harder.

You don’t need any fancy equipment to image this occultation, a mobile phone camera or a simple digital camera held over a telescope eyepiece will do it. I have a special device for holding the camera in place (available from all astro-optical stores, these images were taken with a point and shoot camera with this device) and there are telescope holders for iPads, but a simple camera held to the eyepiece will work (after some fiddling around to get the image into the camera lens).

But the first thing is to enjoy the occultation, worry about imaging it when you have had a good look.

Timings for major cities are shown below, nearby towns will have similar timing.

Write an article and join a growing community of more than 119,600 academics and researchers from 3,847 institutions.