Emma Long does not work for, consult, own shares in or receive funding from any company or organization that would benefit from this article, and has disclosed no relevant affiliations beyond their academic appointment.

University of East Anglia provides funding as a member of The Conversation UK.

Another bitter political battle over a US Supreme Court vacancy came to an end when Amy Coney Barrett was sworn in as the 115th justice on October 26 by President Donald Trump. The Senate vote on her appointment was predominantly along party lines, and was the first time in well over a century that a new justice has been appointed without any support from the minority party in the Senate.

Americans now wait to see what impact Barrett’s appointment will have on the range of constitutional and statutory issues that are due before the nation’s highest court – including abortion, healthcare, contraception, gun control and immigration.

But amid discussion about the wider consequence of her appointment, one question has been largely absent. What might this bruising political battle mean for the court as an institution?

As I have noted before, although the Supreme Court has tremendous power over the lives of ordinary Americans, this is only so because the other branches of government, and the American public, accept its institutional role.

The legitimacy of that role rests not on the ability to compel others to follow the rulings, nor on the ability to provide funding for those rulings, but on its ability to persuade others that its decisions are reasonable. As one of the US founders Alexander Hamilton wrote in The Federalist in 1788, the court has “no influence over either the sword or the purse … neither force nor will, but merely judgement.”

The justices must convince others to follow and enforce their rulings, even when those others disagree with the outcome. That requires legitimacy, and that legitimacy rests not just on the principle of the rule of law, but on the idea that there is some distance between interpreting the law and making political decisions.

But what happens when politicians involved in nominating justices portray the court as little more than another political branch to be “won” or “lost” by those holding elective office? For example, during the successful 2016 Republican campaign to deny Barack Obama the chance to appoint a justice to replace Antonin Scalia, then presidential hopeful Ted Cruz said: “We cannot afford to lose the supreme court for generations to come.”

More recently, Mitch McConnell, the Republican majority leader in the Senate and architect of the appointments of both Neil Gorsuch in 2016 and now Barrett, claimed: “The reason we were able to do what we did … is because we had the majority.” This implies that legitimacy now rests on the political implications of the court’s rulings.

Opinion polls in recent years suggest there is a trend in this direction already. In 2012, the year the court upheld Obamacare for the second time, its approval ratings hit a 25 year low of 52%.

Three years later, having struck down key provisions of the Voting Rights Act and held that same-sex marriage was protected by the constitution, the court’s favourability rating had fallen to 43%. As polls by the Pew Research Center revealed, much of the overall drop in approval was driven by conservative Republicans who argued that the court was too liberal.

Fast forward to September 2020, before the death of the justice Ruth Bader Ginsburg was announced, and the court’s overall approval rating had shot up to near 70% according to Pew research. Although approval of the court increased among both Republicans and Democrats, the sharpest rise came from Republicans whose favourability rating had almost doubled in five years to 70%. At the same time, significantly more Republicans reported believing the court was “middle of the road” while an increasing number of Democrats viewed it as conservative. 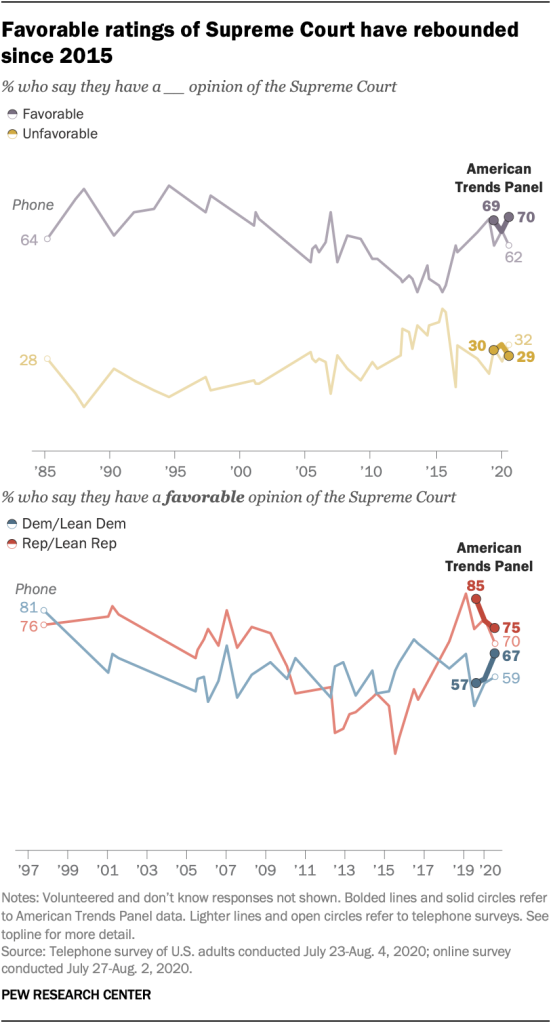 Both Democrats and Republicans implicitly assume that they have a right to control the outcomes of the court – that they have a claim by virtue of the appointment process to get the “right” results in key cases. Setting aside the complex question of whether justices really make decisions based on their personal politics, a fact most justices have consistently disputed, such a claim is deeply problematic.

It opens the door for adherents of one party to argue that a particular ruling is illegitmate because it came from a court with members appointed under questionable circumstances influenced by politics which they disagree.

Read more: Ruth Bader Ginsburg helped shape the modern era of women's rights – even before she went on the Supreme Court

Assume, further down the line, that Democrats, having won control of the White House and Senate, enact some of the changes that have been mooted in the run up to the 2020 election: introducing term limits, increasing the number of justices – called “packing the court” – or changing the appointment rules.

Whether those changes are beneficial or not, they are likely to be seen as political retaliation, linking the court even closer to partisan battles. The Republicans might even argue that the decisions from a future court are illegitimate because it was shaped by their political opponents.

With politically divisive battles over each new appointment seemingly the new norm, and the rise of language which treats the court as part of the electoral spoils, it’s not too hard to imagine a point when decisions are only considered legitimate when they come from a court dominated by appointments from one party of the other.

Politicians of both parties should take note and beware: in treating the court as simply another political branch of government they may undermine entirely its legitimacy. And then both sides lose.

Write an article and join a growing community of more than 158,500 academics and researchers from 4,546 institutions.