Avi Roy does not work for, consult, own shares in or receive funding from any company or organization that would benefit from this article, and has disclosed no relevant affiliations beyond their academic appointment.

I want to live longer and help others do the same. I assumed the most effective way to do that is by understanding the science of ageing and then engineering solutions to extend human lifespan. That is why I became a biomedical researcher and over the past several years I have pursued this goal almost single-mindedly.

When a 2004 study showed that reducing the calorie intake in mice extended their life by 42%, I enthusiastically embraced the results and even put myself on a calorie restricted diet. But, subsequently, a 2012 study showed that long-term calorie restriction may not have the promised benefits. On the contrary, fewer calories without the required nutrients might actually cause harm.

Calorie restriction is not the first such “promising” route that eventually did not live up to the promise, and it will not be the last. Antioxidants showed promise in holding back diseases caused by ageing, but now we know that antioxidant supplements are more likely to shorten your life.

Earlier in May, researchers showed that reducing a protein called NF-kB in mouse brains modestly improved their lifespan. I am not holding out for this result either. Before too long, I’m sure there will be reports of severe side effects of manipulating levels of NF-kB.

Looking at the data I have come to the conclusion that “doing nothing” may be the best option in most cases. This may not be as pessimistic as it sounds and it is definitely not to say that research in fighting ageing must not be carried out.

When I say “do nothing”, I am assuming that you do not smoke or drink too much alcohol, and have access to medical care in case of injury. Such measures are bound to increase your lifespan.

But currently, not intervening in the ageing process is more likely to help you live longer than trying any of the methods I’ve mentioned, not by a few months but by many years. Trying any of those interventions may actually cause harm, and will do so for the foreseeable future.

Lesson from the past

The chart below shows the survival rates – the percentage of the population that lives to a certain age – for men in England and Wales from 1860 to 2010. 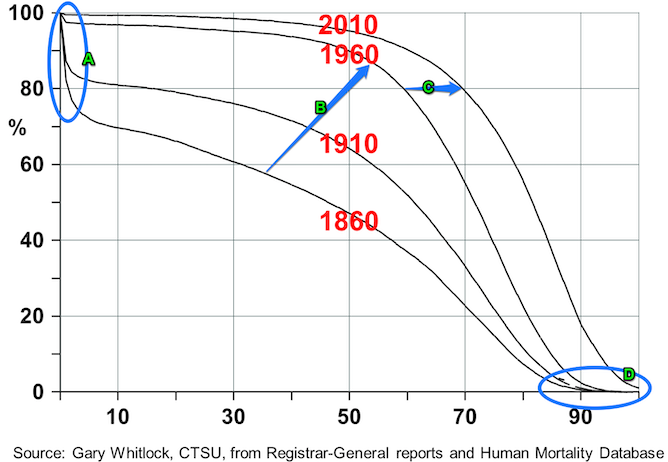 In the 1860s, more than 20% of children died at birth or soon after. On average, men’s health started to decline around the age of 30, and only about 20% of the population survived for more than 70 years.

By 1910, child mortality decreased, thanks to improvements in hygiene and better medical care. This meant more men lived past the age of 50. Circle A shows this reduction in childhood mortality between 1860 and 2010. But, as can be seen from Circle D, the gain towards the end was not significant. This is because only 30% of males passed the age of 70.

Fifty years later, after the discovery of penicillin and invention of more vaccines, 90% of English and Welsh men lived until 50, and more than half survived to 70. Arrow B marks this trend.

What accounts for the change? Between 1860 and 1960, the significant increase in survival rate was due to medical intervention. Since 1960, the survival curve has improved mainly due to reduction in smoking.

This trend is similar in many rich countries, including the US. Druin Burch, a physician and writer, says in his book Taking the Medicine, that eliminating smoking would provide more benefits than being able to cure people of every possible type of cancer.

Many experts believe that human lifespan might actually have an upper limit of 125 years. The average may not increase much beyond 90. If we are to agree with them, this leaves little room for improvement.

But we have never concentrated on maximising human lifespan before. Most people believe human lifespan is finite, so all drugs being manufactured today are targeted towards certain age-related diseases such as diabetes and hypertension. They are not designed to extend human lifespan.

In case of extending human lifespan, those naive interventions would include calorie restriction, antioxidant supplements or manipulating the protein NF-kB, as mentioned earlier. They also include the current obsession with replacing fat in foods with sugar, the health benefits of drinking red wine, or the use ofsurgery or supplements to “fight” ageing. This latter industry has grown in the past decade from being non-existent to an estimated worth of $88 billion today.

If intervening in the ageing process with current biomedical science has any positive effect at all, it will be far too small to worry about. It’s far more likely to harm us.

That is why I have decided to do nothing and follow a simple rule: unless I meet with an accident, or suffer from a terminal disease, I will not add anything to my life with the explicit purpose of extending it. To do anything else would most likely do more harm than good.

Write an article and join a growing community of more than 135,400 academics and researchers from 4,195 institutions.