Axel Bruns receives funding from the Australian Research Council for a major study of the use of social media in public communication in Australia.

Queensland University of Technology provides funding as a member of The Conversation AU.

Last week I complained about things getting boring. The previous Australian Twitter news circulation index (ATNIX) – an index of reader engagement measuring how links to Australian news sites are shared on Twitter – came in right on average, and had very few surprises.

I finished by hoping that this time would turn out a little more exciting and it looks like I got my wish.

This week’s edition is positively buzzing with unusual stories and uncommon patterns, so let’s get right into it.

To begin with, it’s been a bumper week: at a total of more than 183,000 tweets to our Australian news sites, the biggest on record since we started ATNIX in mid-June. And there’s another surprise: for the first time this week, ABC News has (just) beaten the Sydney Morning Herald (SMH) into first place on the leaderboard for news sites.

The just over 31,400 tweets this week are ABC News’ best result (and the first time it’s cracked the 30,000 mark) since ATNIX started, better even than the SMH’s own personal best at some 30,800 tweets: 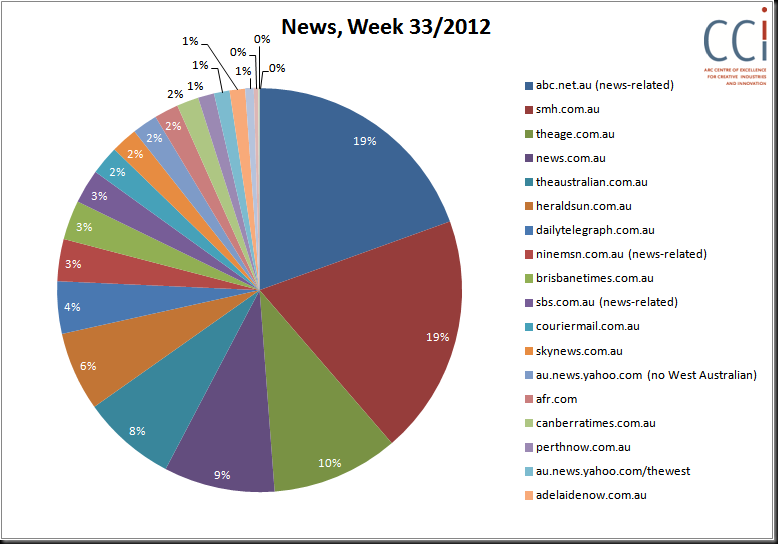 The Fairfax flagships have their own success story this week, though, on the opinion and commentary front: here, not only does the Sydney Morning Herald capture a whopping 24% of all tweets to opinion content this week, but unusually, The Age’s opinion section moves into second place, and past The Conversation (by some margin).

So, it’s not so much that The Conversation had a bad result – the 2,600-plus links to its content which were shared this week almost exactly equal its results for weeks 32 and 31 – but the major Fairfax opinion sites have had a massive week, and the roughly 3,000 extra tweets linking to their commentary this time around are almost entirely responsible for the overall rise in opinion numbers this week.

There’s some unusual shuffling of position going on amongst the also-rans as well, though: 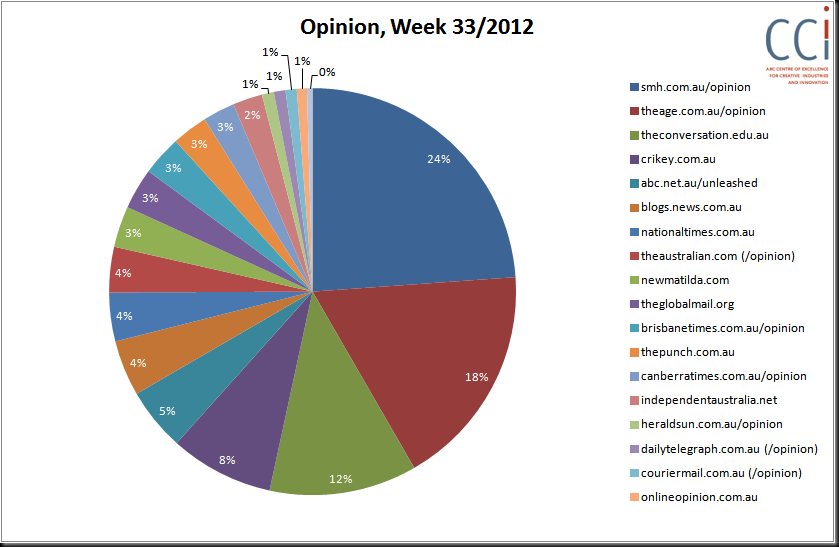 All of which begs some obvious questions: what’s going on here? As always, a look at the daily trends provides a somewhat clearer picture. First, to the news: we see a significant three-day spike in tweets linking to the ABC’s this week, along with a smaller spike at The Age. Look more closely, and you’ll see that even The Australian is performing unusually well on 16 and 17 August:

Responsible for these spikes are words with an “A” this time: Assange and Abbott. The major ABC News spike on 16 August is driven for the most part by its coverage of Julian Assange’s refuge at the Ecuadorian embassy in London: its story on this matter was cited in almost 1,000 tweets.

The same is true for The Australian: two stories on the UK government’s threats towards the embassy, and on Assange’s legal options, received some 900 tweets in total.

This is a classic case of Australian news content receiving wider than usual circulation – in addition to the regular readers of the two news sites, many of the additional tweets linking to these pieces would have come from international followers of the Assange/WikiLeaks saga.

(Even coverage in some of the more minor news outlets boosted their respective numbers – Sky News, for example, added almost 200 tweets to its tally with its piece on the Anglo-Ecuadorian standoff.

For the ABC, though, a second, domestic story further boosted its content circulation – in addition to the Assange coverage, two pieces on independent MP Tony Windsor’s scathing attack on federal Opposition Leader Tony Abbott were tweeted about some 600 times in total.

Barrie Cassidy’s follow-up piece on the poor quality of the journalistic questioning of Abbott statements added another 560 tweets into the mix on 17 August. I can’t think of an international dimension to this story – so I must assume that the significant circulation which this story received was driven purely by domestic factors.

I haven’t said much about The Age’s own spike on 16 August yet – that’s because it’s driven almost exclusively by what is badged as an opinion piece, as the next graph makes clear:

To be honest, we’re in something of a grey area here: the piece (an article on the pro-Assange protests outside the Ecuadorian embassy on London) is published on The Age’s site under an “/opinion” path, and co-badged with a National Times logo, but its style is reportage rather than commentary.

I should note again here that we count all links to the major news sites for our headline news graphs above, and then separate out activity around their opinion sections to compare them against dedicated opinion and commentary sites – a practice which stands us in good stead in this case, as the 950-odd tweets referencing this piece thereby show up as spikes for The Age in both the news and the opinion graphs.

But we’re still not done with the Assange story: due to Fairfax’s content syndication strategy, essentially the same article also ran in the Sydney Morning Herald, where it picked up another 300-odd tweets on 16 August, alongside another not very opinionated, but National Times cobadged piece on Ecuador’s Assange asylum decision which brought in another 150 tweets.

The next day sees another story, on Assange’s speech to supporters, pick up some 230 tweets more – while in a brief break with the Assange story, an article by disgraced former Treasury official Godwin Grech (yes, the man behind the Utegate “scandal” which ended Malcolm Turnbull’s days as opposition leader) on the impending “golden age” of Abbott as PM and Howard as governor-general adds another 220 tweets or so. (I’m still not sure whether that article was meant as some kind of belated April Fool’s prank.)

By Sunday, finally – WikiLeaks cares not for your puny weekends – yet another Assange-related piece generates some 320 tweets for the Sydney Morning Herald opinion section, delivering it its strongest Sunday since we’ve been running ATNIX.

And then there’s that 17 August spike for the ABC’s The Drum (still operating from its /unleashed path on the ABC site). Why yes, that too is a piece on Assange and Ecuador, by Greg Barns. I guess we know now what a media frenzy looks like!

Finally, while (as something of a poor performer normally) The National Times – that is, Fairfax’s imprint for its opinion content – is not included in the graph below, it should be noted that it, too, did exceptionally well on 16 August.

Not only with the National Times-badged pieces in the SMH and Age (which were published under those papers’ respective domain names, and therefore don’t count towards the National Times numbers), but with its coverage of the Windsor/Abbott stoush. Its video of Windsor’s speech received some 185 tweets that day, while its politics liveblog (which also contains the video) picked up another 100 or so.

For a site which otherwise averages less than 100 tweets per day that cite it, the 350 it received that Wednesday were a significant success.

And there you have it – some week, which demonstrates well what happens when Australian news stories go global, as well as showing the somewhat circuitous routes they take as they do so. Why did the Age story on the embassy protests generate nearly 1000 tweets, while the virtually identical piece in the SMH only picked up a few hundred?

The answer most likely lies simply in which well-connected Twitter user posted one or the other first, and how their followers started retweeting it…

Standard background information: This analysis is based on tracking all tweets which contain links pointing to the URLs of a large selection of leading Australian news and opinion sites. For technical reasons, it does not contain “button” retweets, but manual retweets (“RT @user …”) are included.

See the posts tagged “ATNIX” at Mapping Online Publics for a full collection of previous results.

Write an article and join a growing community of more than 150,800 academics and researchers from 4,454 institutions.